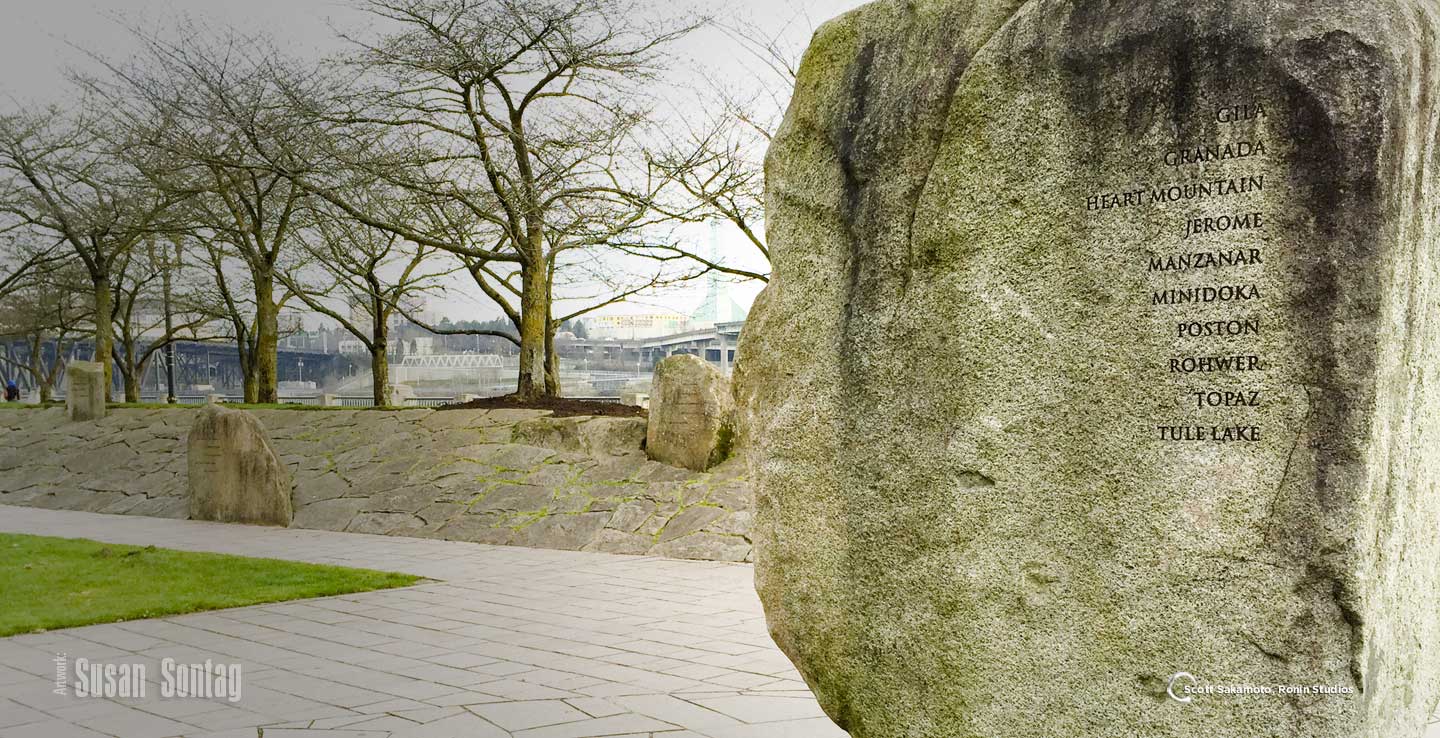 It’s been over a week and I’m still not feeling “Centered”; I am still in disbelief at the unexpected Election Results last week. Yeah, disbelief and numb and, in premature mourning for what could happen AGAIN in the United States of America… am I going to have to witness my Father’s Past?

I am feeling NUMB. So numb that I purchased a large pecan pie yesterday and threatened to eat the whole thing along with 3 cheeseburgers from Carl Jr. to make me feel better because I just can’t seem to shake this strange feeling inside (not love), so I went for food-producing endorphins. Indeed, a satisfying “fix” but not long lasting.

I Am A Marked Man, It’s Only a Matter of Time — “…The broad historical causes which shaped these decisions (to incarcerate Japanese Americans) were race prejudice, war hysteria, and a failure of political leadership.“

This Morning, I just Knew It Was Going to Happen 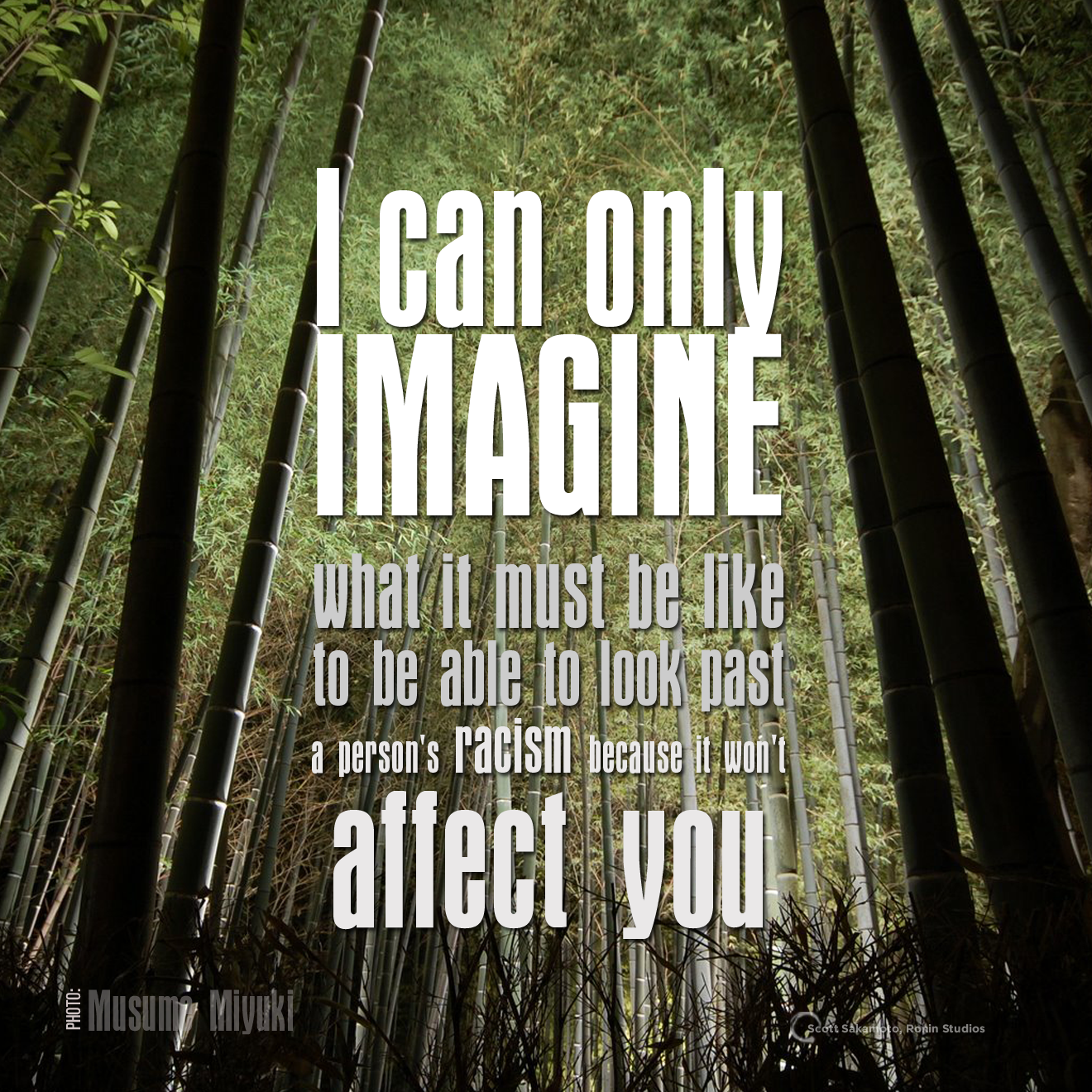 But, Wait; I woke up to a Facebook post this morning about Carl Higbie, co-chair, and spokesperson for the Great America PAC for Donald Trump, mouthing-off the possibility of creating a registry for immigrants from Muslim countries by saying “…We did it in World War II with Japanese. Call it what you will…maybe wrong, but…”

I’ve been fighting it (keeping my lips tight), but this morning’s reading confirms it, I’m a “Marked-Man”, a person of color, and a person who can’t hide from those who HATE. What am I to do? Who will help me? Who will stand with me, and by my side?

Well, Higbie’s attempt to cite Japanese American incarceration as a precedent for this type of action is WRONG and Frightening. It’s a statement intended to lay a marker for a misguided belief that ignores the true lessons of the imprisonment of Japanese Americans during World War II. Captured in the words of a federal commission that stated, “…The broad historical causes which shaped these decisions (to incarcerate Japanese Americans) were race prejudice, war hysteria, and a failure of political leadership.” 1

When and where I see or hear of anybody whether White, Brown, Woman, Man, Asian… Muslim, ANYONE being singled out and unfairly targeted, or where voices of leadership should be speaking out against unfair treatment but remain Silent, — I am saddened and outraged.

“We must not misinterpret our history by believing the Japanese American incarceration was justified as a precedent for similar actions today, and further, we must not use the wrongdoing perpetrated against Japanese Americans during World War II as a justification for the mistreatment of a Muslim Americans and our Arab American Communities.” 2

Today, I also honor those who worked and volunteered tirelessly to create the Japanese Historical Plaza at Tom McCall Waterfront Park as it is a reminder to ALL of Us of our Country’s strong foundation in its Constitution and Bill of Rights. 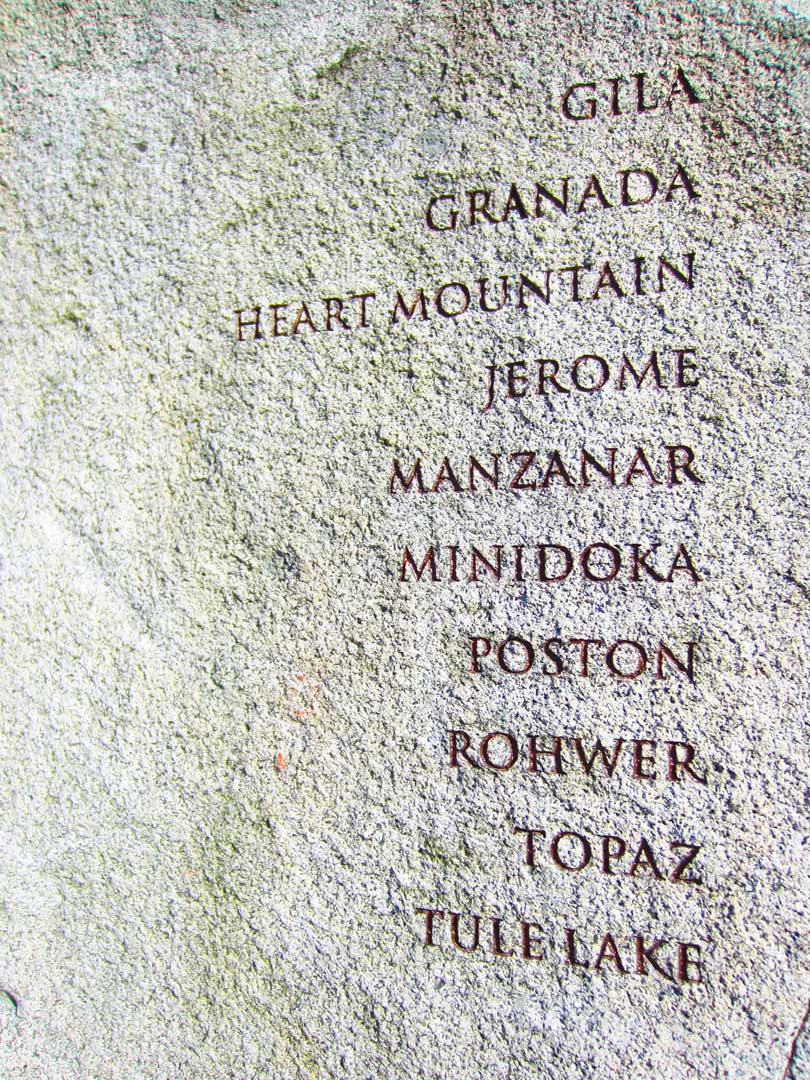 Using thirteen engraved stones of basalt and granite, the Japanese American Historical Plaza in Portland, Oregon tells an important story of the Japanese in Oregon. The story of the hardships suffered by Japanese immigrants and the indignities imposed by the incarceration of persons of Japanese ancestry during World War II. The plaza shows how the rights of Japanese Americans on the West Coast were denied, and honors the bravery of those who served in the U.S. Armed Forces while their families were in the prison camps.

Right: a large engraved granite stone greets you at the entrance to the Japanese Historical Plaza that commemorates the 10 largest Prison Camps for people of Japanese Ancestry during World War II, many who (including my Father) were American Citizens. Thank you, Bob Murase and Bill Naito of your Vision for Portland, Oregon. 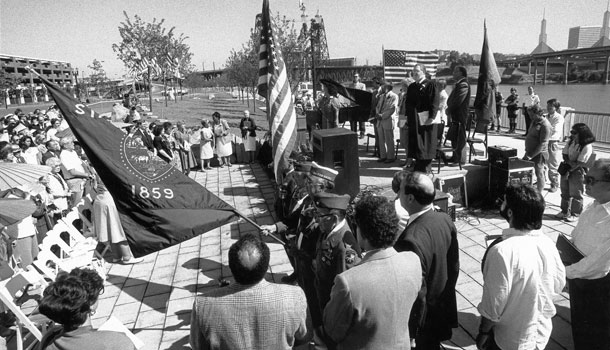 …without a memorial, without a physical gesture of remembrance, we can, we may, we will forget. Already the Japanese internment experience is hardly noted in civics textbooks and in history textbooks. It is barely a footnote in college history courses, and even worse it is not mentioned at all in most law schools. Yet this story, the story that is represented by the memorial we dedicate today, must not, and cannot, be lost.

Only 10-Days to Prepare
They were only allowed to pack what they could carry: (2:20)
“…10 days to undo a life, settle affairs and prepare for an uncertain future.” 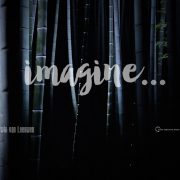 Portland Police, In a Word: Compassionate

Don’t Let Anyone Get Comfortable Disrespecting You
Scroll to top